We Are Called "Betans"

The term "Betan" is the nickname of the alumni and resident members of the Phi Beta Epsilon Fraternity from the original four (4) schools namely, Central Philippine University, University of Iloilo, Western Institute of Technology and University of San Agustin. In 2008, a fifth chapter joined the fraternity, the Iloilo Science and Technology University (ISAT-U). These schools are based in Iloilo City, Philippines.

The origins of the Phi Beta Epsilon Fraternity as written on the pages of the 1948 Centralite, CPU's yearbook. 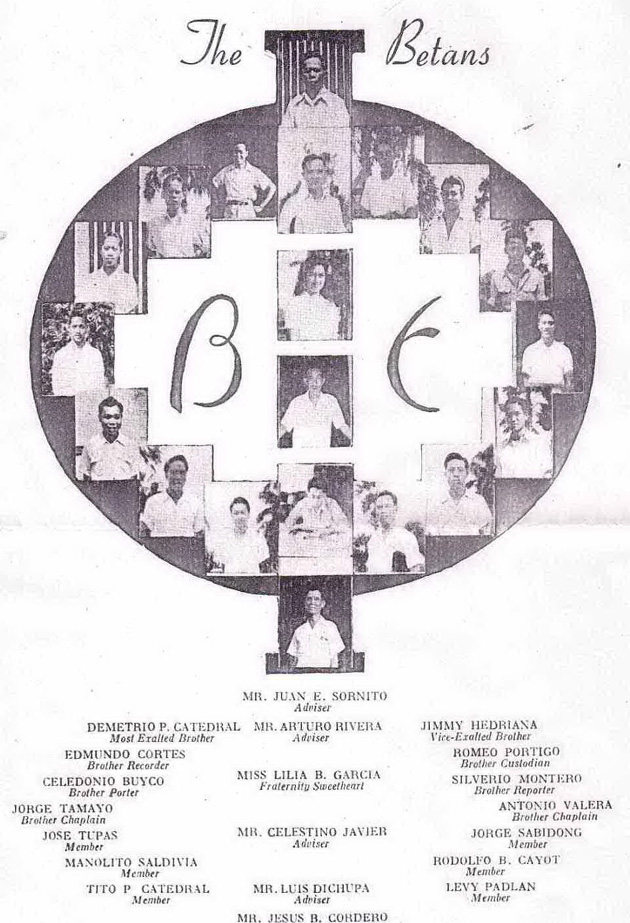 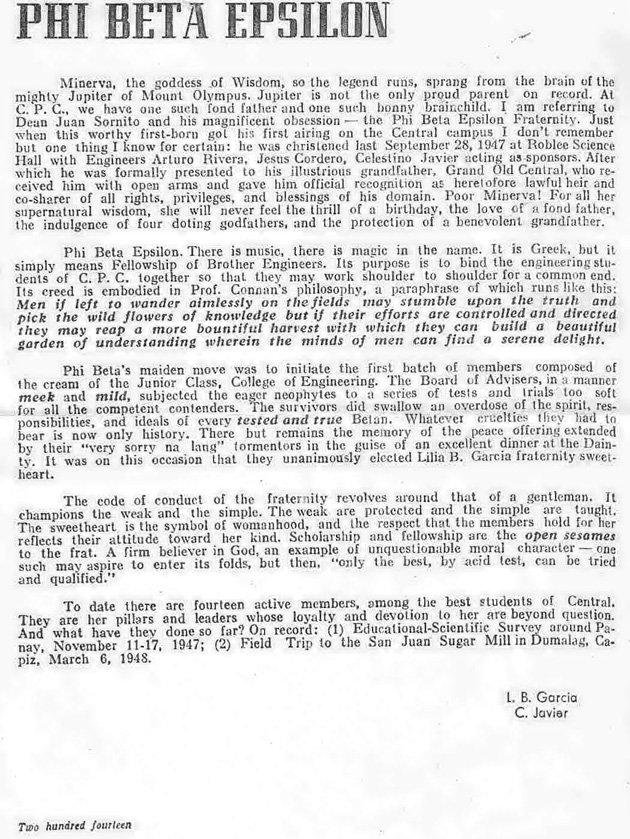 The Betans, a short term for the members of this fraternity, trace their humble beginnings on September 28, 1947 at Central Philippines University (CPU) where the famous mathematician, Dean Juan Sornito and Engr. Celestino Javier joined forces in forming the fellowship and called it the Phi Beta Epsilon Fraternity (Fellowship of Brother Engineers).

Betans at University of Iloilo

In time, some members transferred from CPU to UI, formerly Iloilo City College (ICC). The UI Chapter was organized by the founding brothers and faculty advisers on October 21, 1964 at the La Paz, Engineering Unit in La Paz, Iloilo City. The founders were Bros. Achilles Villa, Jose Robinson Umano Jr., Luis Sustituido, Joelito Malolos, Rogelio Pontioso, Arsenio Fernandez, Rodolfo Tamayo and Wendell Latoza. Between the year 1964 and 1965, the Engineering Department was moved to the corner of Mapa Street, Iloilo City. Some of the brother advisers moved to the newly founded Western Institute of Technology.

Betans at Western Institute of Technology

Incidentally, some faculty members of the College of Engineering in ICC (now University of Iloilo) joined and founded Western Institute of Technology (WIT). Hence, student brothers from both CPU and ICC joined hands and organized the WIT Chapter.

Bros. Edmund Arias, Jessie Aling and George Pontino from CPU and Bros. Rudy Tipanan and Freddie Ortiz from ICC were the organizers. Thus, in February 14, 1969 Batch I of WIT Chapter with fourteen survived members, was formed and that was the start of the fraternal affair that has lured many to its fold.

Betans at University of San Agustin

The first members of the fraternity were Bros. Carlos Sion, Ramy Pudadera and Fruto de la Flor. From the original three members, the membership flourished with close association with the other chapters.

Martial Law was declared on September 21, 1972 in the Philippines and all fraternities were ordered to stop operating. Despite this, the Betans continued to exist and grow in numbers.

At present, the three chapters of Phi Beta Epsilon Fraternity of Central Philippine University, University of San Agustin and Western Institute of Technology continue to exist.

The University of Iloilo Chapter unfortunately ceased to get new members because the school stopped offering 5-year Engineering Courses. The last batch (38th batch) of brothers at the University of Iloilo were accepted at the end of their final rites ceremony on February 25, 1995 and were formally inducted to the fraternity during an Induction and Ball at The River Queen Hotel, on May 6, 1995. Today, the UI fraternity is still inactive inside the university but actively exists within the city of Iloilo as its home base. The brotherhood meets at least once a year in a grand reunion.